The Halloween season has historically been the epoch of fear, but amongst the traditional ghouls and ghosts lies a very real monster that is far more terrifying and damaging than any made-up mythical creature: the misery that can only be inflicted by a deep and lasting recession.

Current headlines are a financial horror show, and one hopes that the light of reality and economic fundamentals are finally kicking in the necessary doors throughout Capitol Hill. With the nationwide average rate for a 30-year mortgage tickling the floorboards of 8%, sales of previously-owned homes fell in September for the eighth consecutive month. 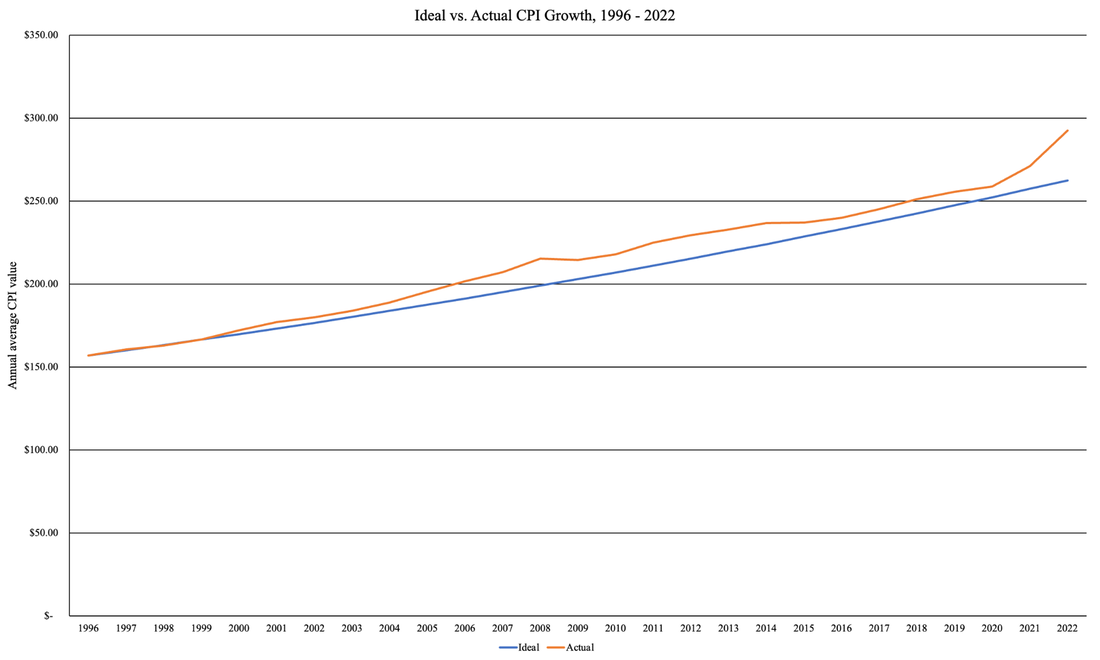 Image source: Google, search term “average us mortgage rate,” 20 October 2022.
​The consistent month-over-month decline is now the longest since 2007, when the housing market collapsed and swept the country into the Great Recession. Fed Chair Powell said back in August of this year that the situation is being monitored, though merely monitoring an impending train wreck won’t prevent it from happening in the first place. The Case-Shiller index – one of the favorite indices for real estate bears – has hit an all-time high of 307; not only is this the highest since the 2008 crash, but it’s the highest since 1890. 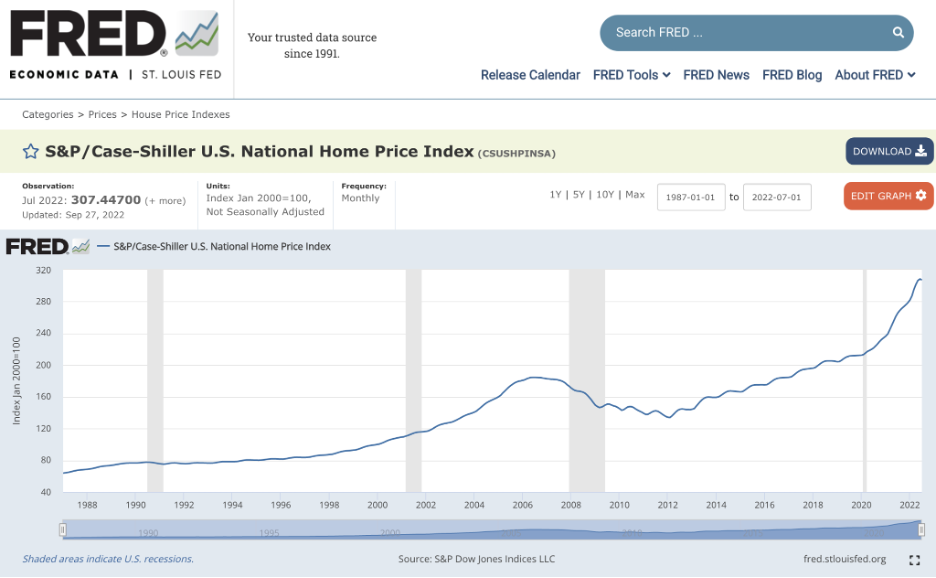 U.S. Department of the Treasury. Fiscal Service, Federal Debt: Dow Jones Indices LLC, S&P/Case-Shiller U.S. National Home Price Index [CSUSHPINSA], retrieved from FRED, Federal Reserve Bank of St. Louis; https://fred.stlouisfed.org/series/CSUSHPINSA, October 20, 2022.. All rights reserved. All FRED® Graphs appear courtesy of Federal Reserve Bank of St. Louis. https://fred.stlouisfed.org/
​The key difference between now and the most recent recessions is that we didn’t have the sadistic combination of skyrocketing inflation and tepid Fed response, and as the housing market goes, the economy is soon to follow. None of these fears should be new: we’ve already sounded the alarm of the current situation becoming stagflationary months ago. Now, a new Bloomberg Economics model projects a 100% probability of hitting a downturn by October 2023, with a 73% chance of a recession hitting sooner. Of course, this begs the question of whether or not inflation will be “solved” by the time the recession finally hits, or whether our prediction was more prescience than pessimism.

This is obviously unwelcome news for politicians, who are running out of excuses and deflections to ease the hearts and minds of Americans. This is also most inconvenient for President Biden, who has already demonstrated the difficulty he has with both understanding facts and providing evidence (or even understanding what constitutes a recession), and his repeated claims that any downturn would be “very slight” is painting him as the boy who should’ve cried wolf.

Here’s the harsh reality: our economy is sounding a death knell and very little is being done to prevent its implosion. The focus on job growth makes for wonderfully misleading fodder for the evening news, but we’re already well beyond an unemployment rate that is generally considered sustainable. Chair Powell already knows what’s coming; economists already know what’s coming; anyone who’s had to spend 13% more for groceries and watched an ever-increasing percentage of their paychecks vanish into their gas tank knows what’s coming. They may not utter the term “stagflation,” treating it as the economic equivalent of a four-letter word, but the truth is it’s already here. It’s been here for months, and most of DC seems hellbent on being the first government in the history of humanity to successfully ignore its way out of an inflationary crisis, economic principles be damned.

The time for the vaunted soft landing has passed. The time for frightening choices is upon us. The government must decide which is the doom they wish to inflict upon the citizenry: the Big Inflation that’s being fought with rate hikes that are little more than toothless nibbles (and which obliterates economies around the world), or the Big Downturn that’s currently sharpening its knives and waiting for our weakest moment to strike.

It’s fitting that the spooky season finds us cornered between equally harrowing choices, albeit with congressional and banking committees instead of covens and cabals. But the outcome remains the same: pain and suffering regardless of the path we take. It’s the sort of Hobson’s choice that horror classics are made of, and as we’re slowly learning, sometimes it’s the politicians that are the real monsters.
Subscribe to updates or if you have any questions or comments, please email us at: garrisonfathom@vuonginc.com